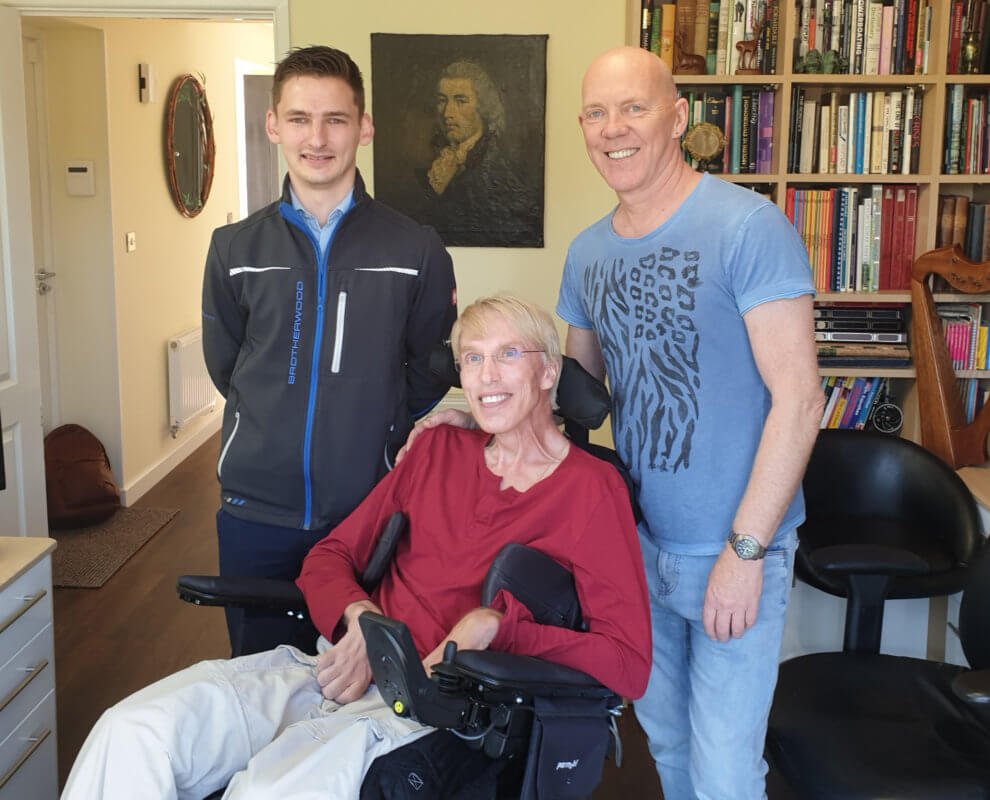 It was an exciting day this week as we had the pleasure of delivering a new Brotherwood Wheelchair Accessible Vehicle to Dr Peter Scott-Morgan!

Peter is a world-renowned roboticist and artificial intelligence expert who upon being diagnosed with Motor Neurone Disease in 2016, set in motion a plan to become the world’s first ‘cyborg’ – assimilating technology into his body in order to not only survive but thrive!

Peter’s groundbreaking transformation is unlike anything the world has ever seen before – and his day-to-day life is currently being filmed for a documentary which will be broadcast on Channel 4 next year as ‘The Human Guinea Pig’.

Pictured is Brotherwood Sales Executive Hayden who had the privilege of meeting Peter and Francis Scott-Morgan to deliver their new vehicle. The handover was filmed by the documentary production crew so you might even catch a glimpse of their new Brotherwood WAV when the programme airs in early 2020!

You can read more about Peter’s amazing story at his
website
, an article which was originally printed in The Times Magazine earlier this year.

We’ll also explore some real-world examples of how Brotherwood® clients across the UK use their vehicles to improve their quality of life.

This website uses cookies to improve your experience while you navigate through the website. Out of these, the cookies that are categorized as necessary are stored on your browser as they are essential for the working of basic functionalities of the website. We also use third-party cookies that help us analyze and understand how you use this website. These cookies will be stored in your browser only with your consent. You also have the option to opt-out of these cookies. But opting out of some of these cookies may affect your browsing experience.
Necessary Always Enabled
Necessary cookies are absolutely essential for the website to function properly. These cookies ensure basic functionalities and security features of the website, anonymously.
Functional
Functional cookies help to perform certain functionalities like sharing the content of the website on social media platforms, collect feedbacks, and other third-party features.
Performance
Performance cookies are used to understand and analyze the key performance indexes of the website which helps in delivering a better user experience for the visitors.
Analytics
Analytical cookies are used to understand how visitors interact with the website. These cookies help provide information on metrics the number of visitors, bounce rate, traffic source, etc.
Advertisement
Advertisement cookies are used to provide visitors with relevant ads and marketing campaigns. These cookies track visitors across websites and collect information to provide customized ads.
Others
Other uncategorized cookies are those that are being analyzed and have not been classified into a category as yet.
SAVE & ACCEPT
Powered by